I apologize for the delay in posting. A family emergency brought me back to the U.S. for February and I am still catching up. 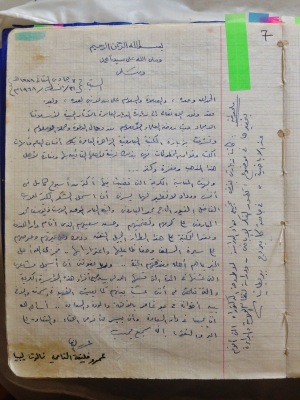 This is a quick post to show an example of a fascinating element of manuscript libraries: their guestbooks. I am far from the first researcher to be interested in Ibadi manuscripts or to visit private libraries like the Salim b. Ya’qub library or the Barouniyya in Djerba. In both cases, the owners of these libraries have kept a record of those guests and researchers who have come to library to see their collections. These livres d’or (guestbooks), are witnesses to the last several decades of research in Ibadi North African history. I decided to post an example. This note comes from the livre d’or of the Barouniyya library in Djerba and the hand is that of the late Libyan historian ‘Amr Ennami in 1968, who did more than any other author in the 20th century to introduce Ibadi Islam and Ibadi manuscripts to English-speaking audiences in his Studies in Ibadism (1972).

Finally, I can’t help but think about the possibility of studying these guestbooks as a way of mapping the network of modern historians of Ibadism!